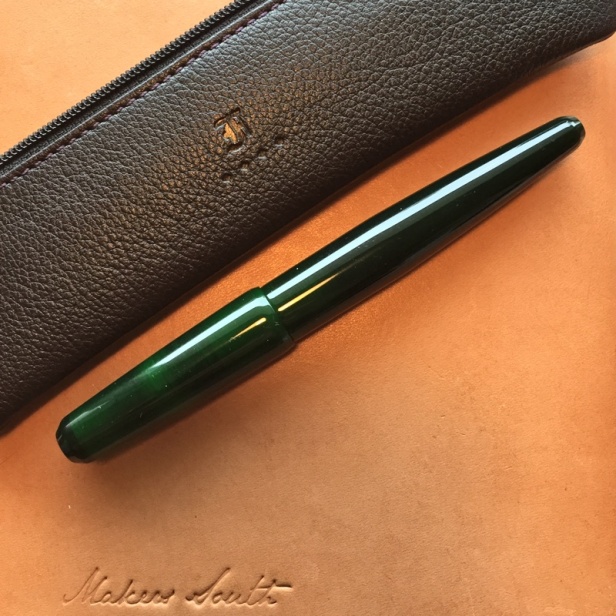 At last fall’s Columbus Pen Show I visited the Franklin-Cristoph booth, my first time handling and playing with their fountain pens. I lusted after the emerald-green P66 and thought “someday.” Although the temptation was strong that day, especially after spending some time with their test pens, most notably the Masuyama fine cursive italic nib, I resisted committing.

Someday, as we all know, eventually shows up. Last week I ordered and received my long-anticipated emerald-green P66 with, you guessed it, the Masuyama fine cursive italic nib (despite the photos, I opted for the steel, not the gold, nib; the reputation of these steel nibs is pretty strong). The pen came with a small, leather zip case which I really like using. I’m not usually one for a case, preferring to drop the pen in a shirt or pants pocket and go about things. But this time the case is really speaking to me. For starters, it’s fairly small, so not a burden to carry. For another, and by purpose, the P66 has no clip, so the case is a useful protector.

This pen is a writer for me, as in, long sessions of journaling or free writing. To that end, I wanted a lighter, smaller than usual pen and the P66 is both of those. Additionally, I’ve always dislike feeling cap threads where my fingers rest above the nib, and the Franklin-Cristoph’s have an ingenious wide-thread capping system that puts these threads out of fingertips. The P66 is a very good feel and heft, posted or not posted.

I did pause in ordering the emerald green over the ice models, whose rough inside clear barrels make for dazzling effects interacting with the wondrous ink colors. I read one review where the author admitted he’s spent about as much time the first two weeks with his F-C ice just staring at and rolling the ink around to see the effect! I have enough distractions when I write, thank you, so decided that was not (yet) a good idea for me. Not saying whether my next F-C won’t be an ice model, but for this primary writer my love for the emerald-green color won over. 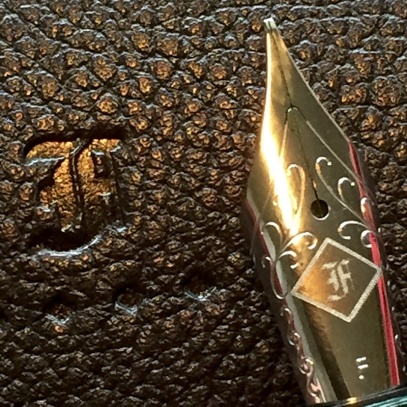